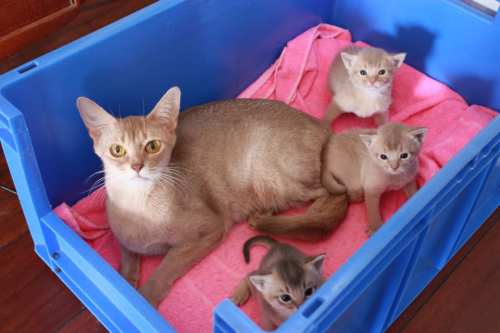 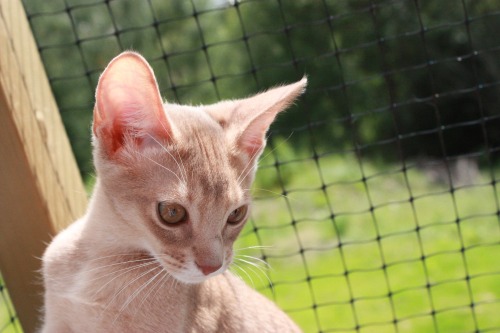 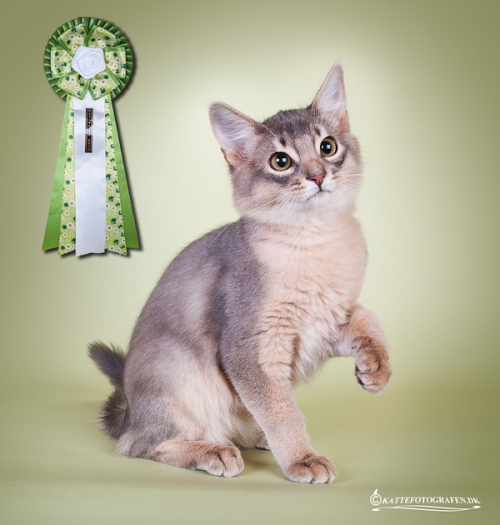 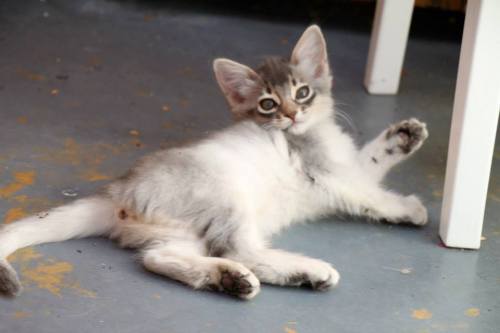 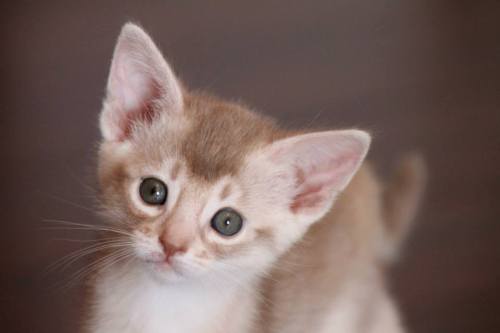 Blue and fawn Abyssinians (and Somali) 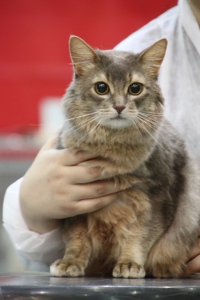 Blue and fawn Abyssinians are often called “the dilute colours”. Dilute means exactly that; diluted and many use the expression only regarding blue and fawn but you mustn’t forget that sorrel is also a diluted version of ruddy. Blue and sorrel are in comparison on an equal footing to ruddy in so far that both are hidden by ruddy while fawn is the result of having both blue and sorrel present…

History
In the beginning there was only ruddy… Or is that correct? It’s difficult to determine if the diluted colour-varieties  of the Abyssinians might have appeared earlier but not been registered because they were considered to be incorrectly coloured. There is a lot that points to other colours than ruddy being produced earlier and in this article I will mainly concentrate on the origin of the blue variety.

Some of the earliest ancestors to the ruddy and sorrel cats of our time are described as “silver” Abyssinians. The famous cat Ch. Aluminium (born 1905) and his son, Ch. Ras Dashan (born 1908), bred by Mrs Constance Carew-Cox, were described as such. Both of these cats are behind most of today’s Abyssinians. The first imports to the US are interestingly enough also described as “silver”. The cats in question were Aluminium II and Salt, both of them born in 1907 and Ch Aluminium was their father.

The first Abyssinian to be proven to carry the blue gene was probably the English male Raby Ashanto, born in 1942. Almost all of today’s blue and fawn Abyssinians can be traced back to him (unless an outcross to other breeds has been done in modern time). How it was proved that he carried blue? By mating him to his own daughters of course.

George Kennedy presented two different theories in his book about blue and “lilac” (=fawn) Abyssinians regarding where Raby Ashanto got his blue gene;

Either the gene was introduced via another breed

or the gene has been present in the Abyssinian breed all along.

If the first theory is correct then you have to look at Ashantos pedigree to find the most likely cat. The most likely cat has to be a non-Abyssinian and in the case of Ashanto that has to be Bruton Bunty, a female born in 1925. All that is known about her is that she came from a litter of brown tabbies. We don’t know if she herself was a brown tabby or if she carried the blue gene.

If the second theory is to be believed then we can actually speculate that the blue gene was introduced as far back as Zula who was imported from Ethiopia in 1866. If this is the case then maybe the first “silver” Abyssinians weren’t really silver but blue! There is actually a large number of  “silvers” behind Raby Ashanto. Personally I’m more inclined to believe this theory as blue is a natural dilute of “black” (=ruddy, brown tabby etc)

Naturally it is possible that both theories are correct! So the blue gene comes from more than one source.

With regards to the sorrel-gene it is claimed that it is a direct mutation of ruddy, why shouldn’t the blue gene have occurred in the same manner? These two fur colour-genes are on the same locus – they’re next to each other compared to dominance. Something I’ll return to a little later in the article.

Fawn
But where does fawn come from then? Is it yet another mutation or…? Fawn is a natural, genetic consequence of both blue and sorrel being present. When two cats with the genes for both blue and sorrel meet then fawn is the result. Fawn is at the very bottom of the order of dominance. In the same way that for instance lilac Siamese and lilac Burmese are late in their dominance scale.

Many breeders of Abyssinians and Somalis believe that sorrel is a “dilute “ of ruddy and “fawn” is a “dilute” of blue. This isn’t quite true.

Brown can be switched with ruddy, chocolate with sorrel and lilac with fawn. These four colours are repeated in most cat breeds in combination with all sorts of other genes, for instance the gene for silver. They are inherited in the same way relative to each other independently of breed or other characteristics.

Brown (black) is most dominant, blue and chocolate are on equal terms and lilac is least dominant

If you have been breeding more than one breed then it might be easier to see the similarities and thereby recognize the pattern. In my breeding career (which started in 1976) I’ve bred Siamese, Burmese, Persian and, most recently, Somali/Abyssinian.

It must be noted that not all breeds have the four basic colours. Two of them are missing in some, often a result of an absence of the chocolate gene. Unfortunately the chocolate gene is introduced via other breeds instead of waiting for a possible mutation. In my opinion this is unfortunate as eventually all breeds are mixed up. Two breeds have been discussed lately; Korat and Norwegian Forest Cat. If the chocolate-gene is introduced to the Korat then both brown and lilac will be the result. Norway managed to prevent this from being allowed in FIFé. If this will be necessary for the Forest Cat remains to be seen but it doesn’t feel right to have a lilac or chocolate Forest Cat! In the wild natural selection might cause the palest colour verities to quite simply disappear.

This discussion is turned upside down when it come to Abyssinians/Somali as the “chocolate” gene (=sorrel) was approved by the cat-organisations first even though this article really shows that it was the blue gene that was first! Also, the four fur colours of the Abyssinian/Somali deviates compared to the one we know from other breeds.

But let me return to how the four basic colours are inherited. In future I will refer to them in the Abyssinian and Somali colours; Ruddy (brown/black), sorrel (chocolate), blue and fawn (lilac). Sorrel and blue are equivalent to each other; sorrel can carry blue and blue can carry sorrel. Fawn is at the bottom of the dominance scale and is only produced when both parents carry both sorrel and blue. If two fawns are mated then they will only produce fawn offspring as they can not carry any of the other three colours.

Somebody might object and say; Yes, but my fawn female has produced ruddy kittens? That is only possible because the male was ruddy. Ruddy is dominant of fawn and the gene for ruddy only need to come from one of the parents.

The problem with colour of undercoat in blue Abyssinian and Somali
Those of you who have shown blue, know that the first thing the judge does on these variants is to separate the fur to see if the undercoat has a warm enough colour to the undercoat. Unfortunately most blue Abyssinians and Somali are given the comment “undercoat too cold”, as many of them are completely white in the undercoat. This easily leads to the follow-up question; are they really blue? Many suspect they in reality are silver. This is naturally a problem for breeders who wish to concentrate on breeding blue. But I suppose that selective breeding will give results as it has in so many other breeds. Only when somebody has it as a goal to create the best possible, will the warm undercoat become a reality. It will take many years, many cat-generations and possibly also a human generation or two.

Would a breed-program with only blues be justified? Is the ideal blue as attractive as ruddy and sorrel? If the assumption that there was blue in the very first Abyssinians is correct then it is very possible that “cat-people” at that time actually preferred the ruddy because they were very special and because of this consequently removed the blue from breeding. A lot point to this when reading older articles about Abyssinians, for instance “The Abyssinian Cat” by H.C. Brooke from 1929. He say among other thing that “the silver Abyssinian (let us assume that he really meant blue) definitely is a foreign colour in the breed and because of this it wouldn’t matter if these were kept separate from the others. I find it hard to believe that they damaged the breed badly by introducing a grey tint in the fur resulting in the beautiful ruddy tint that we saw in the cats long ago has been lost. Where it came from, or if matings were done to create them, I don’t know. I have no idea if silvers even exists now, personally I hope not although some might disagree with me there. Brown with a warm tint is acknowledged by the older writers as the real Abyssinian colour. I think Harrison Weir, in 1882, is the first one to mention “silver” which he does with a kind of contemplation and refers to it as a new verity. For a period of time the judges seemed to love them”

What is most typical Abyssinian?
Yes, what colour is really the best colour for the Abyssinian, (or Somali for that matter)? That is of course a question which is down to each person’s preference and emotion. There are so many reasons to why any cat is the most beautiful. It is very rare that the best of the breed is foremost in your mind at that moment. Either a cat’s look and expression appeals to you or it doesn’t.

But what is most typical Abyssinian? In my personal opinion it is first and foremost the ticking and rufism (the warmth of the undercoat). Secondly it is the eartufts and the type which creates the Abyssinian. If the ticking is blurred and the undercoat cold in colour then the Abyssinian looks more like a common shorthaired cat. This is why it becomes so important, if other colours than ruddy are accepted, that ticking and warmth of undercoat is of the first priority. This can only be accomplished by gathering the correct polygenes. How is this accomplished? Well, you have to have a through knowledge of the lines you are working with to be able to select the cats that has or gives the warmest undercoat. Some people claim that this isn’t possible when working with the blue colour. Blue born to ruddy with a very warm undercoat have been very cold in furcolour. This indicates that the blue gene “prevents” rufism to present itself. If this is a sustainable theory or not remains to be seen. Many more blues have to be born before this theory can be confirmed.

I have intentionally not mentioned fawn, you have to judge for yourself if fawn is obvious enough with regards to ticking and undercoat colour…  It seems like fawn doesn’t have the same problem as blue does with the cold undercoat.

This article was written in 1996, and is unchanged from the original text. It was published in ABY-Kuben no 3 – 1996.